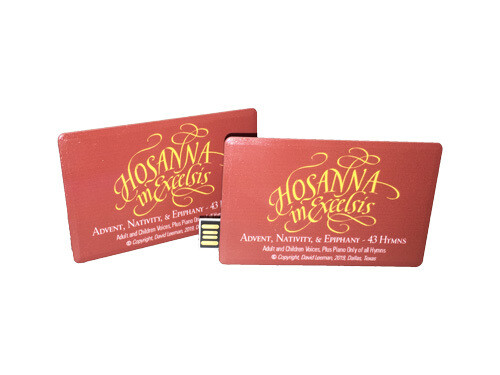 Recordings for the Hymns in "Hosanna in Excelsis" - Advent, Nativity & Epiphany - 43 Hymns

This recording includes the 43 piano and vocal recordings from "Hosanna in Excelsis" and 43 tracks with piano alone as described below.

All piano arrangements by David Leeman
Recording produced by Dr. Casey McClure
Recordings on location and in studio, B Side Audio, Bradley Prakope, engineer

Copyright 2019, David Leeman, Student Hymnal LLC, Dallas, Texas
Permission is granted to load these files to any playback devise owned by purchaser of this USB Drive

The Purpose and Plan of the Recording

The purpose of this recording is to teach the hymns in the book, “Hosanna in Excelsis,” to any who do not know them and to provide a simple accompaniment for singing along. They are not highly arranged or accompanied by multiple instruments, so that the focus is primarily on the tune and the text. The voices alternate between adult male and female voices plus children, in similarity with a family presentation. The alternation might be imitated to provide variety and focus on the text. Each hymn is presented with a simple introduction and brief interlude between each stanza. The tempos may be slightly slower than may be used in congregational singing in order to concentrate on the lyrics and their meaning.

The plan is that before you read the information about the hymn that provides its historical background and devotional thoughts, you would first listen to the recording with singers. Next, read the information on the left-hand page of each hymn. Finally, play the piano-only recording and sing along. Singing aloud each hymn will deepen the impact these rich treasures have in your heart and spirit. When sung with others it will unify your minds in the truth of these hymns.

Pianist: Stephen Nielson
Growing up in a pastor’s home, Stephen loved hymns from childhood. When asked how many years he has been playing the piano, he replies “from 9 months before I was born!” as his mother was a distinguished piano teacher. From a long professional career in both classical and sacred music, Stephen Nielson is widely regarded as one of the distinctive artists of our time. For more than four decades he was one-half of the acclaimed duo-piano team of Neilson & Young. His concertizing has taken him literally around the world to dozens of countries and to the major artistic centers in Russia, the Baltics, Japan, and Switzerland. He is an Ambassador of Culture for the World Cultural Alliance. Hailing a performance in Germany, the Berlin Morgenpost said, “Highly sensitive, articulate artistry,” while Brussels’ LeSoir exclaimed, “Exciting masterful playing.” His discography includes numerous recordings of the classical repertoire, hymn tunes in classical style, and duet with cello and voices. His writing achievements appear in the catalogues of several American publishers. Stephen resides in Dallas and maintains a large teaching studio. He has been awarded the honored designation, “Steinway Artist” and in 2019 was honored by Steinway with induction into the Teachers Hall of Fame.

Soprano: Jenni Till Rasberry
Because her father was a church musician, including for many years as the Minister of Music at the famous First Baptist Church, Dallas Texas, Jenni has always loved and sung hymns. But professionally she has sung leading roles in all the major choral works on three continents. These include Messiah, Elijah, St. Matthew Passion, St. John Passion, Bach’s Magnificat, Creation, Mozart’s Requiem, and Beethoven’s Ninth Symphony. She has made highly regarded appearances with the Dallas Symphony, the London Chamber Orchestra, the New Japan Philharmonic in Tokyo, the Fort Worth Symphony, the Nashville Symphony, and the New Orchestra of Spain. The Fort Worth Star Telegram defined her performance as the soprano soloist in Messiah as "most impressive. She brought a clear, ringing tone, and strong stage presence to her part." Jenni resides in Dallas and serves as a vocal instructor for the Arts Academy of Park Cities Presbyterian Church.

Tenor: William R. Park
William also grew up in a Pastor’s home where his first music was in the church. He received his Bachelor of Music in Vocal Performance from Baylor University and his Masters of Music in Vocal Performance from the University of Cincinnati-Conservatory of Music. After finishing his studies he moved to New York City and got his first Off-Broadway show in his first year and his first Broadway show in his second year in the city. While in New York he worked with Oscar and Tony Award winning artists, directors, composers and choreographers Sir Andrew Lloyd Webber, Harold Prince, Trevor Nunn, Rob Marshall, Christine Ebersole, Henry Krieger, Jillian Lynne and Robert Longbottom, all for the Broadway stage. On the operatic stage he worked with John Alexander, Italo Tajo, Jonathan Eaton, Fabrizio Melano and Jim deBlasis, and studied voice with William McGraw and Dr. Joyce Farwell. His Broadway credits include, The Phantom in The Phantom of the Opera, Gus the Theatre Cat in Cats, Buddy in Sideshow. He has performed leading roles in over numerous Off-Broadway and regional shows. His Opera credits include: Normanno in Lucia Di Lammermoor, Nemorino in L'elisir d'amore, Prince Ramiro in La Cenerentola, and he has won awards from San Francisco Opera. He has served as an Adjunct faculty member at Seton Hall University in New Jersey and at Collin College as well as directing, performing, and maintaining a private voice studio. He currently resides in Madison, Wisconsin.

The Children: Winston Miller, Virginia Waterman, Helen Waterman
Middle and High School age, all three children are experienced singers in various school and community choirs, including the Children’s Chorus of Greater Dallas. Their mothers are each professional vocalists and music teachers.

All the hymns are Public Domain with the following exceptions. Each are used with permission.

“Thou Who Wast Rich Beyond All Splendor,” Text by Frank Houton ©, 1934, OMF International

“Joy Has Dawned upon the World,” Text and Music © 2005, Thankyou Music, administered by Capitol CMG Publishing

Save this product for later
Display prices in: USD

“I love that my children have grown up learning, singing, and memorizing hymns. I praise the Lord for calling and gifting David and Barbara Leeman to create and produce Hosanna, Loud Hosanna, The Student Hymnal, so that children may have their eyes turned upon Jesus. But this hymnal is a tremendous resource to help ALL ages of God’s people to worship him in spirit and in truth—privately in family worship and in corporate worship. Now the beautiful accompaniment recordings enables us to sing along in our private or even public worship. What a gift! Take time to listen, sing, and learn about he God to whom ALL of these hymns point. You will be blessed!”

“In recent years we have had the privilege in life to become parents. And, though we have not worked as extensively as many in children’s music, lately we have spent more time writing and reflecting on the subject since we now have two little daughters of our own.

It is particularly unusual, given the fact that much children’s literature today is story-driven, highly involved, complex, mystical and requiring such intellectual commitment, that in comparison, much current children’s theological teaching, songs and even worship to Almighty God can be so simplistic and shallow rather than telling the ascendant and beautiful story of Christ. It is refreshing to see a book of hymns selected for children to sing that tell the gospel and teach complex biblical truths in a timeless way.

We are so excited about the publication of this hymnbook for children. Our prayer is that our children will be singing theologically-rich hymns such as the ones found here long after we are gone and will continue to pass them on from generation to generation.”

“I was so touched, so blessed, so amazed by the beautiful Hosanna, Loud Hosannas Student Hymnal! When I turned to the hymn “Holy, Holy, Holy” and saw that beautiful print, “The Song of the Lark,” I just had to stop for a long moment and admire that stunning print – it is so filled with meaning in so many ways! …I hope that future generations of young people will be blessed and inspired when they use this wonderful hymnal!”

“I wholeheartedly recommend Hosanna, Loud Hosannas Student Hymnal especially for Christian families. It provides one of the best learning aids for hymnal education that I have ever seen. We have easily integrated into our daily practice of family worship. After seeing its high quality, we ordered one for each of our children. What a wonderful keepsake for them and their future families!”

“Hosanna, Loud Hosannas is much more than a hymnal. Each of the carefully selected hymns includes biographical information about the author, notes about the music and deeper exploration into the theology expressed in the hymn. The beautifully produced book includes vivid art reproductions.”

“It should not be an unrealistic goal for every Christian household to own a hymnal. This would be an excellent one to start with.”

“David and Barbara Leeman bring a wealth of experience to this endeavor, including years of experience teaching music to children. Their love of hymnody and what it adds to our worship shines in this collection. The book is nicely bound and will serve the child who owns it for many years of use. It is one of the few books that is worth buying for each child in the family to use. This is a book to won, to give children and grandchildren, and a book to use for your own purposes, particularly if a traditional hymn book is daunting. Highly recommended.”

“We’ve loved adding this book to our family. I’ve enjoyed relearning many of the songs from my youth and passing down to my sons the traditions of the Church. Hymns may seem dull and boring to you, but besides being rich is theology, praise, and encompassing the full scope of the Christian life, they connect generations. My 78 year Nana and my 4 year old son can sing Blessed Assurance together. What a beautiful picture that is of Jesus’ multi-generational Body. If you’re looking to add song into your family devotions I’d start here.”

“Hosanna, Loud Hosannas: “Essential Hymns Every Child Should Sing,” it is a unique new resource every Christian parent should consider acquiring and using. can be used in a variety of settings, whether Sunday school, children’s worship, or family devotions at home. With beautiful artwork and detailed indexes for easy searchability, it is a gift to students, parents, and grandparents alike.”

“In my view, hymnals are next to the Holy Scriptures in importance. They are an indescribable repository of theological truth, abundant scripture references, beautiful music paired with time-honored texts, great poetry, plus significant history lessons relating to composers, writers and the reasons for writing what they did. The contents of hymnals paint a rich picture of God’s people as a singing people of faith.”

“The Song of praise to God-with-us cannot be stilled, because it does not depend merely on us or on any other generation. We live with the echoes of earlier believers still sounding in our ears.”